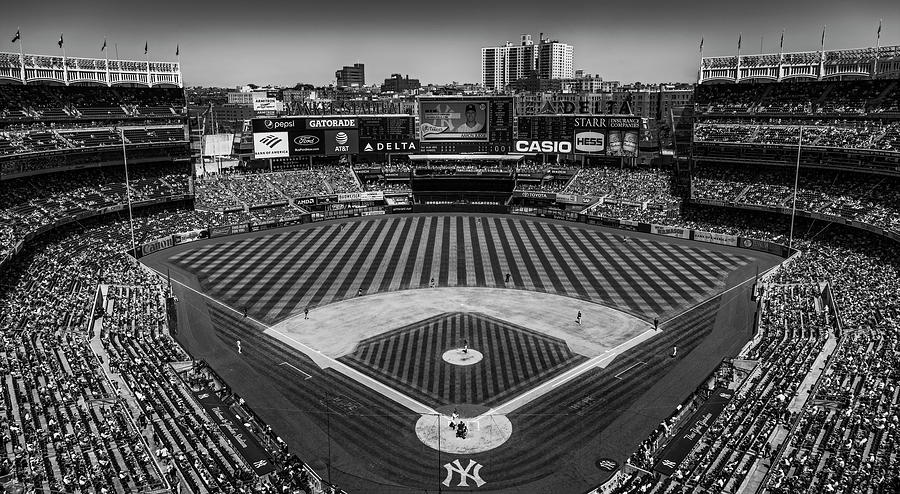 The Yankees are arguably the most successful professional sports team in the United States; they have won 40 AL pennants, and 27 World Series championships, all of which are MLB records. As of today, they are the only team to have hit a home run in 28 consecutive games.

The Yankees have won more titles than any other franchise in the four major North American sports leagues. Forty-four Yankees players and eleven Yankees managers have been inducted into the National Baseball Hall of Fame, including Babe Ruth, Lou Gehrig, Joe DiMaggio, Mickey Mantle, Yogi Berra, and Whitey Ford.

The stadium is located in the Bronx, New York hence why they are called the Bronx Bombers. The new Yankee Stadium opened in 2009 and the NY Yankees won the World Series, the same way that when the original Yankee Stadium was opened in 1923.

This image is available in color as well as black and white.

To view additional images or photographs from this or any other of my collections please visit www.susancandelario.com

Thank you very much!!!

Congratulations on your feature in the Fine Art America Group "Images That Excite You!"

Congrats on your sale!

What a cool picture!

Thank you very much!!!

Wow! This is a perfect capture in b/w of the iconic stadium...brilliant work, Susan! L/F